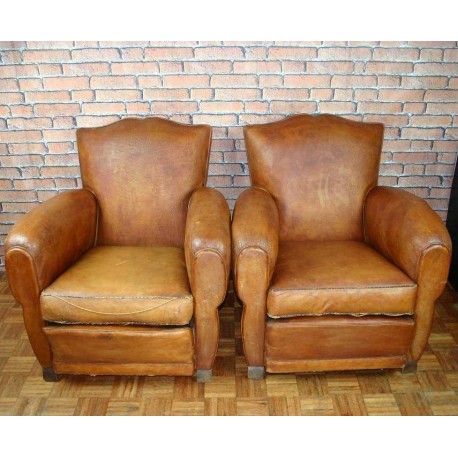 Fantastic Pair of Vintage French Club Chairs called "Moustache Club Chairs" Model c. 1950. The leather is beautiful with a stunning patina. Amazing back! In excellent vintage condition. Perfect for a relaxing moment alone or with your half!

This product is no longer in stock

This Pair of Vintage Moustache Leather Club Chairs has been found near Lyon, France. They have aged beautifully and will look stunning in any interior! For those who like the original springs seat (which were kept) these are amazing! For one of them we added a thin wooden board to protect those original springs and make them last even longer!

Those famous Club Chair were made in France at the beginning ot the 20th century and were called as "Comfortable Chairs". they became famous in England and were used in Gentlemen's Clubs and became called "Club Chairs". Many different shapes were created, but only a few remain nowadays. the most know are of course "the Round Shape" or "the Moustache" and "The Gendarme's Hat".

If you never had experienced to seat in a Club Chair, well you should! It is so comfy, the leather touch of the armrest, the smell of the leather and just the character they have are just delighted! once you have experienced it you will never leave without one in your home ever again!

No customer comments for the moment.

30 other products in the same category: